You are here: Home > Articles > Ed Force One


Ed Force One is a Boeing 757-200 operated by the British airline Astraeus converted into the specialised and eye-catching Iron Maiden travel plane. It came about after lead singer Bruce Dickinson gained a commercial pilots license when taking time out of the band and became a charter pilot for the air company. He became a captain for Astraeus, although his chances to take on the task full time were curtailed after rejoining the band in 2000 for the Brave New World album and tour (this was due to the aggressive touring of the schedule of the band). 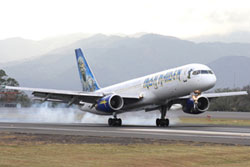 He continues to fly commercially (sometimes with the airline offering special flights for UK fans to book tickets on that he would be to captain of, although these were not on 'the' Ed Force One plane, they could be considered the same thing as the plane was the same, it just did not have the custom livery). The name of the plane was selected via the official Iron Maiden website, on which they asked fans to submit their ideas for what the plane should be called, Rod Smallwood commented on the final decision:

"From well over 2000 entries, Bruce and I chose ED FORCE ONE. Although many were quite original in concept, it has a nice ring to it. In the tie breaker pretty well all of you chose to flatter the band! Very nice of you! Anyway, we chose WILSON's entry - "Timeless, inspirational, continually evolving, but always true to themselves, camaraderie that survives the evil that men do!" - I like the reference to camaraderie as I feel that it's something the Maiden and their fans are very much about."

In October 2007, Iron Maiden announced that for the Somewhere Back in Time Tour, they had commissioned the airline for which Bruce flies to use their one of their 12 strong fleet as a touring aircraft around the world . Contrary to popular belief, it is not actually owned or operated by the band as many websites report, but instead remains an Astraeus plane and is leased by the band for use. The plane was repainted, with the band's famous logo spreading from the cockpit to the wing in blue text with a yellow border, the tail of the plane has a giant Eddie painted on it from the Powerslave era, with lightning effect behind him. The name of the tour and it's year is also written along the side of the plane in a smaller font, while the engines again follow the blue, white and yellow effect.

After using the plane for the late 2007-early 2008 legs of the tour, the band and the plane operators decided to convert a large amount of the plane from carrying an estimated 12 tons of touring equipment such as speakers, guitars, amps and 60 crew members into seating as it would be in a commercial airliner and began offering special flights to concerts in it, most usually starting from the UK and flying to European dates, some of these flights were made with other members of the band flying alongside fans and posing for autographs as well as pictures.

There are hundreds of pictures of the plane around the internet, due to the interest that it generates when in sight at public airports as well as the following that it has amongst Iron Maiden fans, especially those who have been lucky enough to have taken a flight onboard. We have included a few great shots of the plane below, but if you have any more that you'd like to see included, simply use our contact form. If you are interested in taking a ride in Ed Force One, or any plane piloted by Bruce Dickinson, then keep an eye out on special arrangements made for any European tour dates made in the future, or any special flights announced on either the news section of Maiden-World in regards to the plane or the Astraeus site as he often flies normal commercial flights which aren't associated with the band.

You are here: Home > Articles > Ed Force One
All content, images and other resources are the property of their respective copyright holders
Specific website content & style is copyright © 2003-2018 maiden-world.com, All Rights Reserved
Admin E-mail: admin AT maiden-world DOT com , Site Design by Jon Simpson