You are here: Home > Articles > The History Of Iron Maiden's Mascot - Eddie


Eddie, Iron Maiden's mascot, first appeared with the band after their stage manager at the time (Dave Beasly) designed a head that was placed above the drummer at concerts and periodically spat blood through it's mouth. The joke which went with the head was:

'A woman had given birth to just a head, the doctor told her she needn't worry since he would come up with a suitable body for good 'ole Eddie within a year or five. So five years later Eddie's father entered the room on Eddie's birthday and said: "well today's your birthday, and boy do we have a surprise for you!" after which Eddie replied: "Oh no!, not another bloody hat!"' 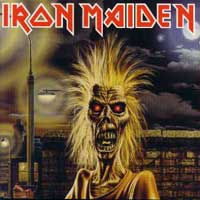 Eddie did not have a body until Iron Maiden met Derek Riggs, who designed a body to accompany the head. The band subsequently decided to keep this body secret until their first album 'Iron Maiden' was released. In 1980 the body was revealed, with the first incarnation of Eddie looking remarkably different from other Eddies since. It also only showed the top half of his torso.

Eddie caused much controversy for the band on the Sanctuary and Women In Uniform single covers. The Sanctuary cover depicted the Iron Maiden mascot having stabbed Margaret Thatcher to death. (Margaret Thatcher was the British Prime Minister at the time). This was censored out and widely believed to have been banned by Magaret Thatcher herself which is false. Rod Smallwood (the bands manager) had decided the black bar that was put on the cover to censor it was good publicity. The black bar is only present in the UK edition, the European releases do not have it.

On the Women In Uniform sleeve Margaret Thatcher is shown hiding behind a wall waiting to ambush Eddie with a sub-machine gun, Eddie is shown walking along hand in hand with a nurse and a schoolgirl which caused more controversy and ended with feminists branding Iron Maiden sexist.

The Number of the Beast sleeve showed Eddie controlling the devil whilst the devil is controlling a smaller puppet of Eddie. Many people believe this is where the misconception that Iron Maiden are a "satanist band" (something that the band have always fiercely denied)

For Iron Maiden's album Piece Of Mind Eddie was in a mental asylum and had been lobotomised (the reason for the bolt on his head). The bolt from this has remained with eddie throughout the years.

The Powerslave cover depicted Eddie as a huge shrine on a pyramid in ancient egypt. This cover had many hidden messages included on it such as "Bollokz" on the left hand side of the pyramid and "What a load of crap" on the right hand side. Above the entrance to the shrine is Derek Riggs logo 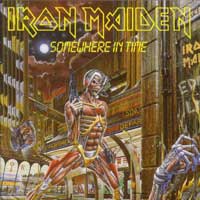 The Somewhere In Time logo is full of hidden messages (All of which were featured in our article, Somewhere In Time Cover Art Secrets) and shows Eddie as a futuristic being with a laser gun, looking much like a 'Terminator' (Terminator I was released in 1984, with Somewhere in Time released in 1986 so this was very much the imagery of the time). This graphic imagery can be directly contrasted against the Seventh Son Of A Seventh Son artwork, which shows just the top half of Eddie over a lake with his own entrails clutched in his hand.

The No Prayer for the Dying (1990) artwork showed Eddie in a rather old state cracking out of a grave and Fear of the Dark (1992) was produced by a different artist (Melvyn Grant). The X Factor differed from the normal style of Iron Maiden covers showing Eddie with his legs missing and on an Electric Chair. Many people thought this was a computer model when they first saw it but in reality it was a photograph of a minature model made by Hugh Syme 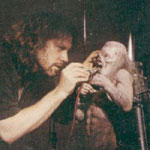 The Virtual XI cover was based on the Ed Hunter video game in which you play as Eddie blasting your way through many familiar parts of Iron Maiden's history. The reunion album Brave New World (2000) featured an Eddie face smiling down from the sky on a futuristic London. Some regard this as the best Iron Maiden cover artwork ever.Shortly afterward, after he produced artwork for the Wicker Man single release that was rejected, Derek Riggs announced that the Wicker Man single release art would be last piece that he would create for Iron Maiden, attributing this to the fact that "they are too difficult to work with" 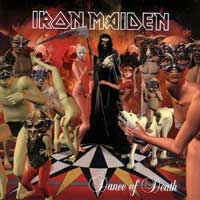 On "Visions Of The Beast" (2003) Eddie gets his brain back in the final sequence as it flies around him. Even though he recieved his brain back, the artwork on the Give Me Ed Tour Eddie still retained the bolt on his forehead. (The Dance of Death artwork did not feature the bolt on Eddies forehead)

2003 saw Iron Maiden's new album "Dance Of Death" achieve great success although many questioned its peculiar choice of artwork. It featured Eddie looking much like the grim reaper on a geometrically patterned dance floor with hooded characters in the background. In the foreground 11 CGI people and 2 CGI animals appeared. There appear to be many mistakes in this artwork as has been pointed out many times (These can be read in the article Dance Of Death Cover Mistakes)

Eddie has evolved greatly over the 25+ years of Iron Maiden's career and he will undoubtedly evolve and change with the band, before their reign at the top of Metal music is over.

You are here: Home > Articles > The History Of Iron Maiden's Mascot - Eddie
All content, images and other resources are the property of their respective copyright holders
Specific website content & style is copyright © 2003-2018 maiden-world.com, All Rights Reserved
Admin E-mail: admin AT maiden-world DOT com , Site Design by Jon Simpson