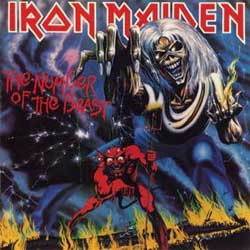 
Longboats have been sighted and the evidence of war has begun
Many Nordic fighting men, their swords and shields gleam in the sun
Call to arms defend yourselves, get ready to stand and fight for your lives
Judgement day has come around so be prepared don't run stand your ground

They're coming in from the sea they've come, the enemy!
Beneath the blazing sun the battle has to be won
Invaders...Pillaging!
Invaders...Looting!

Set ablaze the campfires and alert the other men from inland
Warning must be given and there's not enough men here for a stand
The Vikings are too many, much too powerful to take on our own
We must bring reinforcements, we cannot fight this battle alone

Axes grind and maces clash as wounded fighters fall to the ground
Severed limbs and fatal woundings, bloody corpses lay all around
The smell of death and burning flesh, the battle weary fight to the end
The Saxons have been overpowered, victims of the mighty Norsemen

Children of the Damned


He's walking like a small child, but watch his eyes burn you away
Black holes in his golden stare, God knows he wants to go home

He's walking like a dead man, if he had lived he would have crucified us all
Now he's standing on his last step, he thought oblivion well it beckons us all

Now it's burning his hands, he's turning to laugh
Smiles as the flame sears his flesh
Melting his face, screaming in pain
Peeling the skin from his eyes
Watch him die according to plan
He's dust on the ground, what did we learn?


I'm on the run, I kill to eat,
I'm starving now, feeling dead on my feet
Going all the way, I'm nature's beast
Do what I want, I'll do as I please

Run fight to breathe, it's tough
Now you see me, now you don't, break the walls, I'm coming out

Not a prisoner, I'm a free man, and my blood is my own now
Don't care where the past was, I know where I'm going...Out!

If you kill me it's self defence,
If I kill you then I call it vengeance
Spit in your eye, I will defy,
You'll be afraid when I call out your name

Run fight to breathe it's gonna be tough
Now you see me, now you don't, break the walls I'm coming ou

Not a prisoner I'm a free man, and my blood is my own now
Don't care where the past was, I know where I'm going
Not a number I'm a free man, I'll live my life how I want to
You'd better scratch me from your black book, cos I'll run rings round you

Steve Harris, Adrian Smith
If you're feeling down depressed and lonely, I know a place where we can go
22 Acacia Avenue, meet a lady that I know
So if you're looking for a good time, and you're prepared to pay the price
Fifteen quid is all she asks for, everybody's got their vice

If you're waiting for a long time, for the rest to do their piece
You can tell her that you know me, you might even get it free
So any time you're down in the East End, don't you hesitate to go
You can take my honest word for it, she'll teach you more than you can know

Charlotte can't you get out from all of this madness?
Can't you see it only brings you sadness
When you entertain your men, don't you know the risk of getting disease?

Some day when you're reaching the age of forty
I bet you'll regret the days when you were laying
Nobody then will want to know, you won't have any beautiful wares to show any more

22, the Avenue, that's the place where we all go
You will find it's warm inside, the red lights burning bright tonight

Charlotte isn't it time you stopped this mad life?
Don't you ever think about the bad times?
Why do you have to live this way? Do you enjoy your lay or is it the pay?

Sometimes when you're strolling down the Avenue
The way you walk it makes men think of having you
When you're walking down the street, everybody stops and turns to stare at you

22, the Avenue, that's the place where we all go
You will find it's warm inside, the red lights burning bright tonight

Beat her, mistreat her,
Do anything that you please
Bite her, excite her,
Make her get down on her knees
Abuse her, misuse her,
She can take all that you've got
Caress her, molest her,
She always does what you want

You're running away don't you know what you're doing?
Can't you see it'll lead you to ruin
Charlotte you've taken your life and you've thrown it away
You believe that because what you're earning
Your life's good don't you know that you're hurting
All the people that love you don't cast them aside
All the men that are constantly drooling
It's no life for you stop all that screwing
You're packing your bags and you're coming with me

The Number Of The Beast

Steve Harris
I left alone, my mind was blank,
I needed time to think, to get the memories from my mind
What did I see? Can I believe
That what I saw that night was real and not just fantasy

Just what I saw in my old dreams,
Were they reflections of my warped mind staring back at me
'Cause in my dreams it's always there,
The evil face that twists my mind and brings me to despair

Night was black,
Was no use holding back,
'Cause I just had to see
Was someone watching me
In the mist, Dark figures move and twist,
Was this all for real
Or some kind of hell

666, the number of the beast
Hell and fire was spawned to be released

Torches blazed
And sacred chants were praised,
As they start to cry
Hands held to the sky
In the night,
The fires burning bright,
The ritual has begun,
Satan's work is done

666, the number of the beast
Sacrifice is going on tonight

This can't go on,
I must inform the law,
Can this still be real
Or some crazy dream?
But I feel drawn toward the evil chanting hordes,
Seem to mesmerize me, can't avoid their eyes

I'm coming back, I will return,
And I'll possess your body and I'll make you burn
I have the fire, I have the force,
I have the power to make my evil take its course
Back to the top

Run To The Hills

Steve Harris
The white man came across the sea,
He brought us pain and misery
He killed our tribes he killed our creed,
He took our game for his own need
We fought him hard we fought him well,
Out on the plains we gave him hell
But many came to much for Cree,
Oh will we ever be set free?

Riding through dust clouds and barren wastes,
Galloping hard on the plains
Chasing the redskins back to their holes,
Fighting them at their own game
Murder for freedom the stab in the back,
Women and children and cowards attack

Soldiers blue in the barren wastes,
Hunting and killing the game
Raping the women and wasting the men,
The only good Indians are tame
Selling them whiskey and taking their gold,
Enslaving the young and destroying the old

Adrian Smith, Clive Burr
Shadows may hide you, but also be your grave
You're running today, maybe tomorrow you'll be saved
You pray for the daylight to save you for a while
You wonder if your children will face the killer's smile

Face at the window leers into your own
But it's only your reflection still you tremble in your bones
How long can you hide, how long till they come?
A rat in a trap but you've got to survive

Once you were glad to be free for a while
The air tasted good and the world was your friend
Then came the day when the hard time began
Now your alone but alive... for how long?

A knife at your throat, another body on the pile
A contract to keep and it's service with a smile
Murder for vengeance or murder for gain
Death on the streets or a blacked out jail

Dead men...gangland...murder
In Gangland you tell no tales
Back to the top

Steve Harris, Dave Murray, Clive Burr
Cold as steel the darkness waits, it's hour will come
A cry of fear for the chosen worshipping the sun
Mother natures black revenge on those who waste her life
War babies in the garden of Eden shall turn our ashes to ice

Gone are the days when man looked down
They've taken away his sacred crown
To be so free, it took so long
It's not the journeys end, it's just begun


Hallowed Be Thy Name

Steve Harris
I'm waiting in my cold cell when the bell begins to chime
Reflecting on my past life and it doesn't have much time
Cos at 5 o'clock they take me to the gallows pole
The sands of time for me are running low... running low...

When the priest comes to read me the last rites,
I take a look through the bars at the last sights
Of a world that has gone very wrong for me

Can it be there's been some kind of error,
Hard to stop the surmounting terror
Is it really the end not some crazy dream

Somebody please tell me that I'm dreaming,
It's not easy to stop from screaming
But words escape me when I try to speak

Tears they flow but why am I crying,
After all I'm not afraid of dying
Don't I believe that there never is an end?

As the guards march me out to the courtyard,
Someone calls from a cell, "God be with you"
If there's a God then why has he let me go?

As I walk all my life drifts before me,
And though the end is near I'm not sorry
Catch my soul it's willing to fly away

Mark my words please believe my soul lives on,
Please don't worry now that I have gone
I've gone beyond to see the truth

When you know that your time is close at hand,
Maybe then you'll begin to understand
Life down there is just a strange illusion


All content, images and other resources are the property of their respective copyright holders
Specific website content & style is copyright © 2003-2018 maiden-world.com, All Rights Reserved
Admin E-mail: admin AT maiden-world DOT com , Site Design by Jon Simpson